What is the Vmotion 2.0 concept from Nissan?

Is Nissan working on an autonomous vehicle?

Nissan is a quiet company that is always pushing the envelope. The company is constantly working to stay ahead of the curve to make the most technologically advanced cars that they can. So is Nissan working on an autonomous vehicle? A new concept may have the answer to that question. 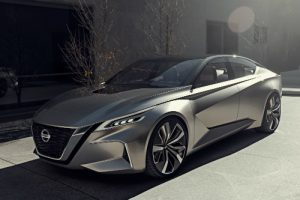 Recently Nissan debuted the Vmotion 2.0 concept car. In many ways, this car appears to be more than a concept, but rather an evolution of the modern Nissan four-door. The outside has an abrupt and bold design language, and the inside is more of a space than a car. With unique and inviting doors, a zebra wood floor, and wide screens that stretch across the dash, this is a future we can get behind.

Learn More: What is the Nissan Titan King Cab?

Is the Vmotion 2.0 concept car an autonomous vehicle?

Though the Vmotion 2.0 is just a concept car, Nissan envisions that it will allow for autonomous driving. Not just on the highway either, but urban roads with intersections too. This car represents the Nissan commitment to zero automotive emissions and zero automotive fatalities.

Though there has been little talk regarding the drivetrain, Nissan did say that it would be a zero emission vehicle. This means that it is likely either an all-electric car like the Nissan LEAF or a hydrogen car. Both are very interesting ideas for Nissan.

What is Nissan doing to improve their sustainability

Will the Vmotion 2.0 concept ever enter production? 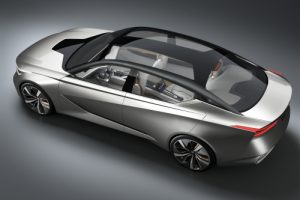 It is unlikely that the Vmotion 2.0 concept will ever enter production, at least not without some changes. This is a concept vehicle after all, and concepts are meant to show what a company is capable of while also being a visual test for future technologies. However, that doesn’t mean the Vmotion 2.0 idea will disappear. Nissan already said it best:

“Vmotion 2.0 previews what the future designs from Nissan will be. And it is an insightful proposition of what the future sedan could be in the coming years.” – Shiro Nakamura, Nissan Senior Vice President and Chief Creative Officer

You will likely see design cues, concepts, and technology from the Vmotion 2.0 trickle down into the Nissan lineup in the coming years. One thing is for sure, if the Nissan future looks anything like the Vmotion 2.0 concept, then we are definitely excited.

What is the Vmotion 2.0 concept from Nissan? - Charlie Clark Harlingen