What is the Nissan Titan King Cab?

If you are considering buying a truck, then the cab is perhaps one of the most important things you are considering. In an effort to cater to a wider customer base, Nissan has added a third cab option to its lineup with the King Cab. See the 2017 Nissan Titan King Cab debut at Chicago Auto Show right here. 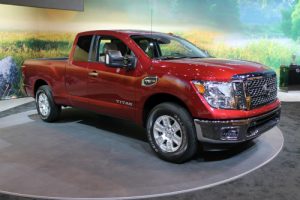 Previously the Nissan Titan and Titan XD had two cab options for customers to choose from. The options were the Single Cab and the Crew Cab. The Single Cab was the traditional truck cab that was present with trucks since the very beginning. It features enough room for two to three people, and is built to maximize bed space.

The Crew Cab is at the other end of the spectrum. With the interior room of a four-door SUV, and a large bed in back, the Titan with the Crew Cab is perfect for when you know you are going to be hauling people just as well as cargo.

The new Titan King Cab sits right between the other two cab options. With back doors that open to the rear, there is plenty of room for up to 6 people, and the cargo room in the bed is still significant. This new King Cab will be available at the S, SV, and PRO-4X trim levels for the Titan and Titan XD truck in the spring of 2017.

How much cargo can the 2017 Nissan Armada Hold?

How long is the bed in the Titan King Cab?

Nissan is putting its customers first and offering a rear-seat delete option for the King Cab. This is the first time in the segment that this has been offered. Now you can have all the room of the King Cab, but without the rear seats. This give you extra room to store things that you would like to keep locked up in the cab. Keep your tools and equipment safe in the King Cab with rear-seat delete from Nissan.

What is the Nissan Titan King Cab? - Charlie Clark Harlingen