Americans have always had a special love for sports cars. It is hard not to lust after their sleek exteriors and their powerful engines! Most people feel that they will never be able to own a sports car because they are too expensive, but that is not true! The 2016 Nissan 370Z has an MSRP of $29,990! This sports car is not only affordable, it is incredibly fast thanks to its engine power and speed capability! 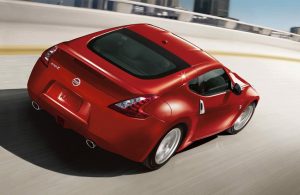 The 2016 Nissan 370Z is a 2-seat sports car that has a sculpted exterior. It is available in both coupe and convertible format. The coupe features a slanted roof that adds to the model’s sportiness, while the convertible allows its passengers to enjoy the sunshine!

Under the hood of the 2016 Nissan 370Z is a 3.7L V6 engine. This engine delivers 332 horsepower and 270 lb-ft of torque. It can be paired with either a SynchroRev manual or 7-speed automatic transmission. Thanks to this kind of engine power, drivers will enjoy an exhilarating ride! Even with all of that power, the 2016 Nissan 370Z is able to attain an estimated fuel economy of 19 mpg in the city and 26 mpg on the highway.

The 2017 Nissan Maxima has Arrived!

If you are ready to get behind the wheel of your dream sports car, stop by Charlie Clark Nissan in Harlingen, TX and test drive the 2016 Nissan 370Z today!